A break from usual musings on programming languages for a detour into a human language: Arabic.

Arabic words are generally based on trilateral roots: three consonants which define the underlying meaning of the word. Words with similar meanings share the same root. As a result, the meaning of the word is encoded in its structure, and that structure is relational. Arabic is not the only language to follow this pattern. Semitic roots shape the structure of Hebrew in a similar way, offering an interesting window into etymology, cultural context, and semantics.

To form a word, these consonants are modified by adding different long and short vowels, prefixes, and suffixes to create the final desired inflection of meaning. Such modifications follow patterns that reflect across roots.

The Arabic dictionary is organized around these three-letter roots. To look up a given word, you need to know its root and what letter the root starts with, which may not be the first letter in the word. This means that looking up a word implies looking up its core meaning, not simply a prefix.

One of the most well-known examples of this involves the word for human, “insân” (إنسان), which has the root N-S-Y (ن س ي). This root is shared by the verb “nisyâh” (نسى), which means “to forget”, suggesting that to be human is to be inherently forgetful.

This root, N-S-Y (ن س ي), is also shared with the verb “unsiyah,” which means “to relate, to love, be familiar with”, describing the social nature of humans.

Another example is the root R-H-M (ر ح م‎), which connects the word for a mother’s womb, “rahim” (رحم) to the word for loving mercy, rahma (رحمة).

This is a chart underlying ten verb forms, read right to left. It is central to understanding Arabic because of how structured the language. Keep in mind morphology works differently in Arabic than it does in English. 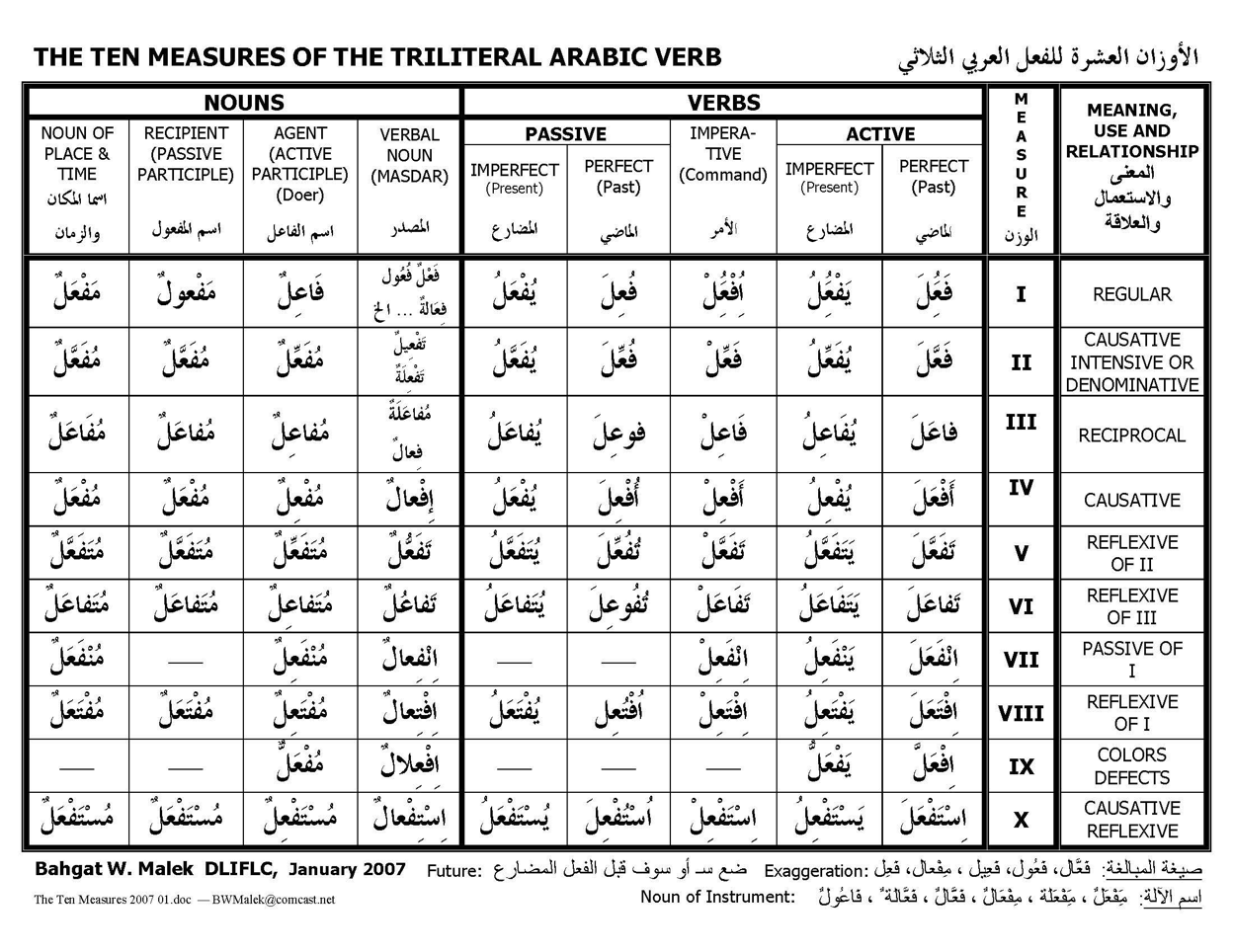 To illustrate how this chart is used, I’ll go through examples and annotate the chart with steps. Being a native Urdu speaker, I’ve chosen Arabic words that also happen to exist in Urdu for convenience. While I provide their definitions in English upfront, let’s pretend we don’t know what they mean and are using this chart for the purpose of looking up the definition in the Arabic-English dictionary.

Familiarity with Arabic letters and basic reading comprehension is assumed. 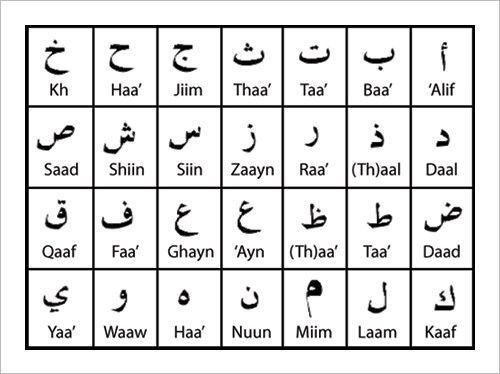 Recall, to look up a word in a dictionary, you need to know its trilateral root, so the first order of business is to use this chart to find that trilateral root. The trilateral root is given by the past-tense singular masculine verb (i.e., the top row in the rightmost column). 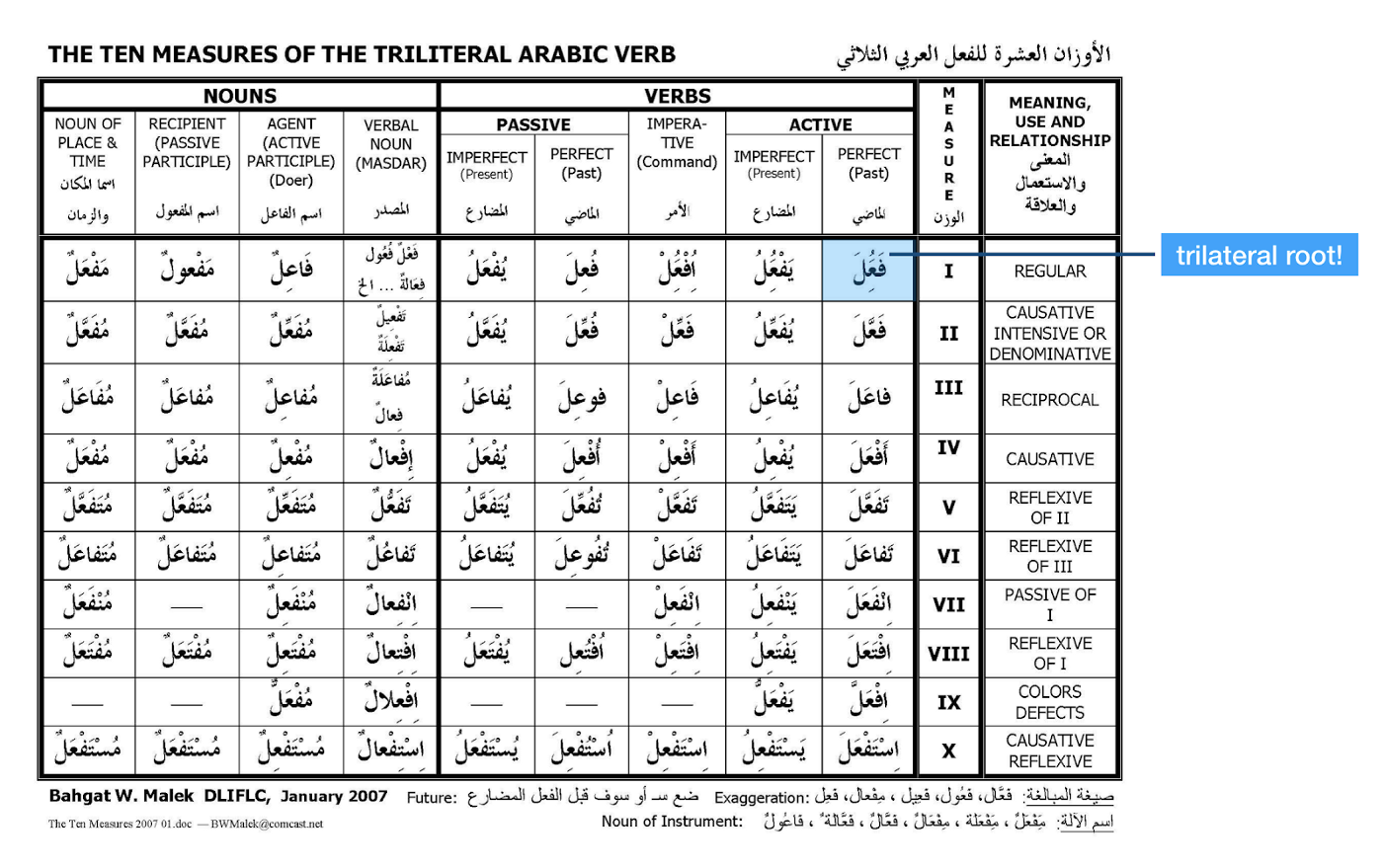 The trilateral roots in the chart are like variables (X-Y-Z), given by fa-3a-la (ف-ع-ل). The remaining grid entries build the word around these roots, applying transformations to achieve various forms that can be traced back to the root. More on this later.

For our first example, consider the word majbur, مجبور, which means “to have to do” or “to be forced to.” I’ve annotated the original chart, breaking the process down into a sequence of steps that need to be taken to finding the trilateral root. 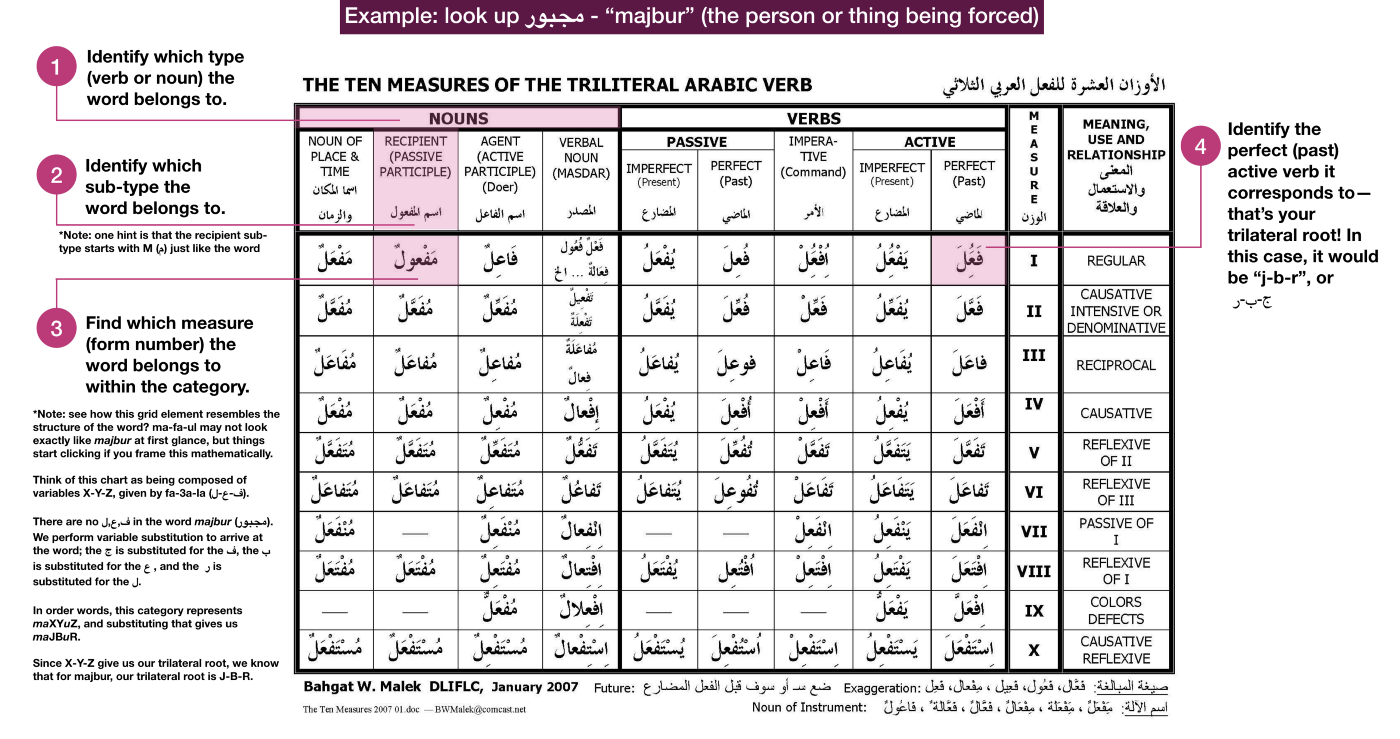 The first step is to identify which type the word is, a verb, or a noun. Infinitives don’t work the same way in Arabic as they do in English, so this is a noun. 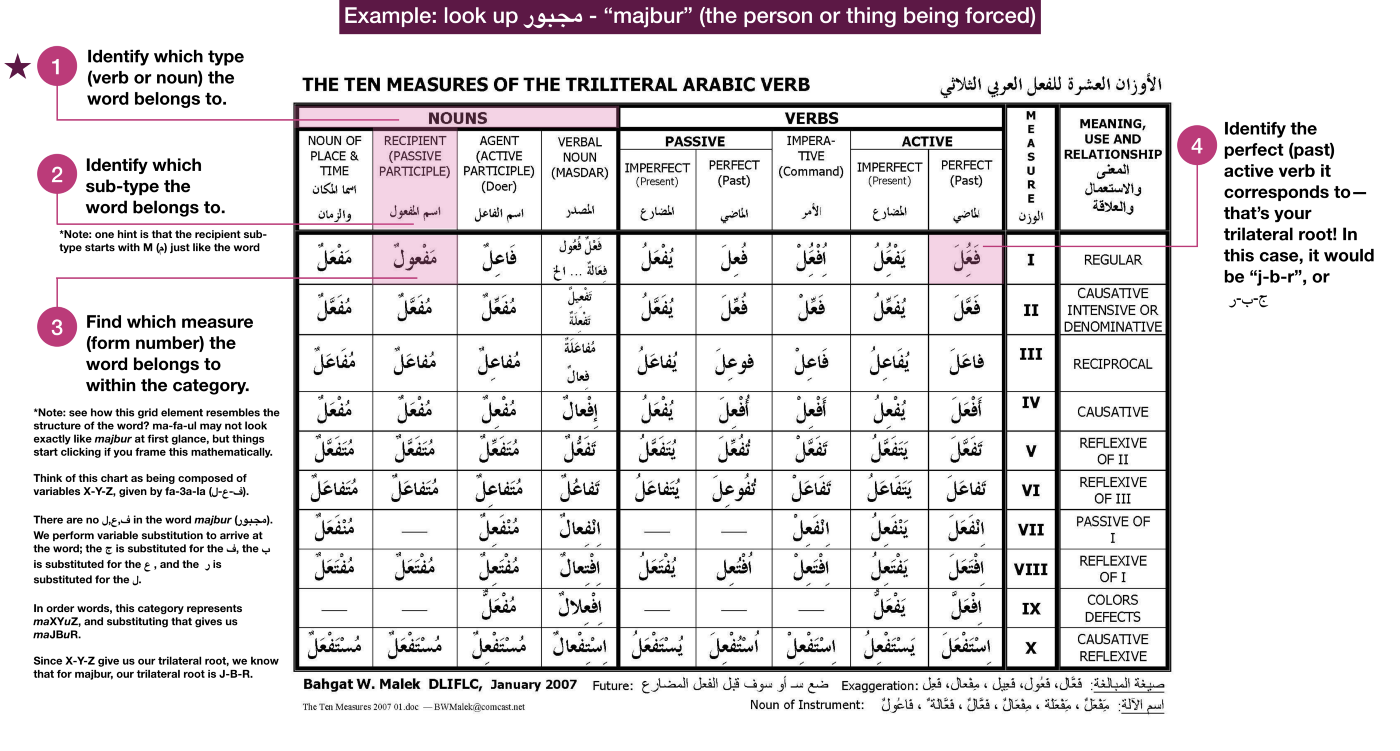 The second step involves identifying the sub-type. To determine which sub-type the word is, we can examine the structures of nouns, and figure out which type of noun our word structurally resembles. In this case, we can note that the last two categories, “noun of place & time”, and “recipient (passive participle)” look most like our word, since they start with M (م). 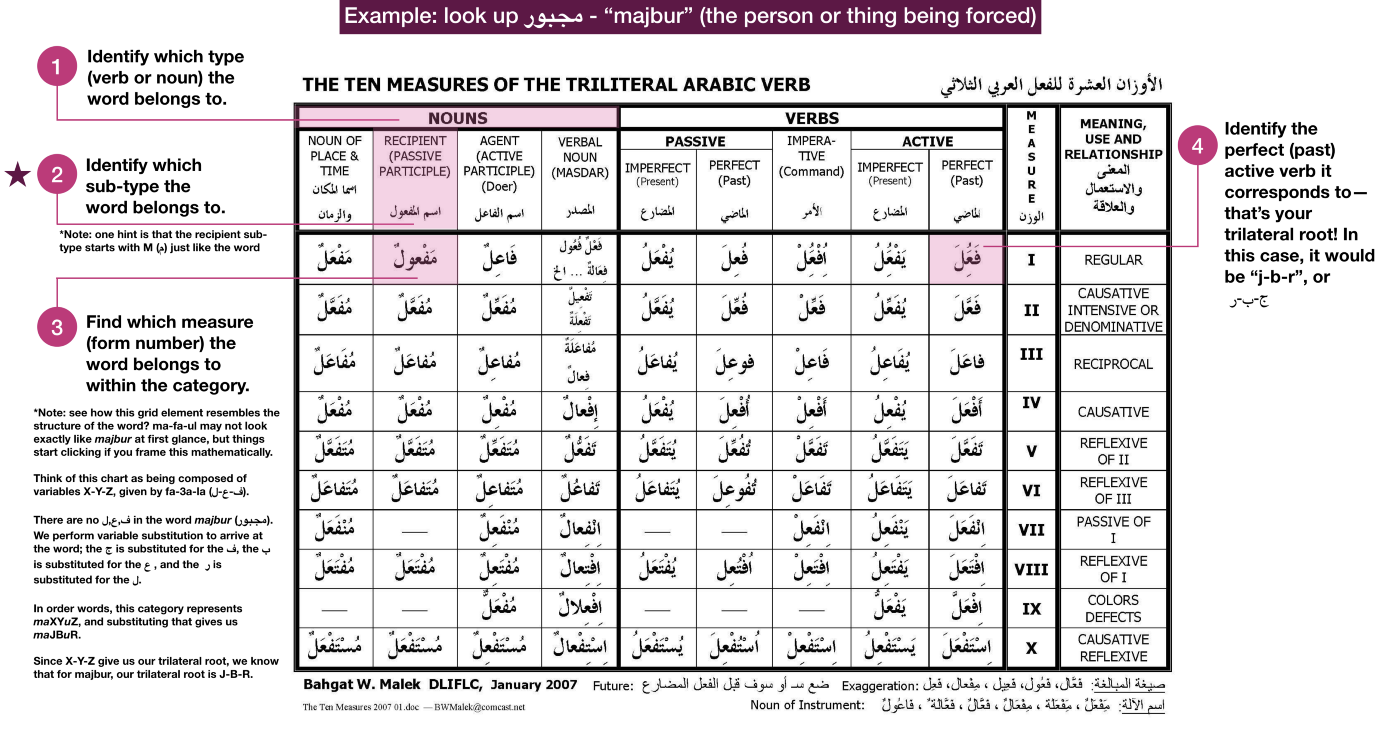 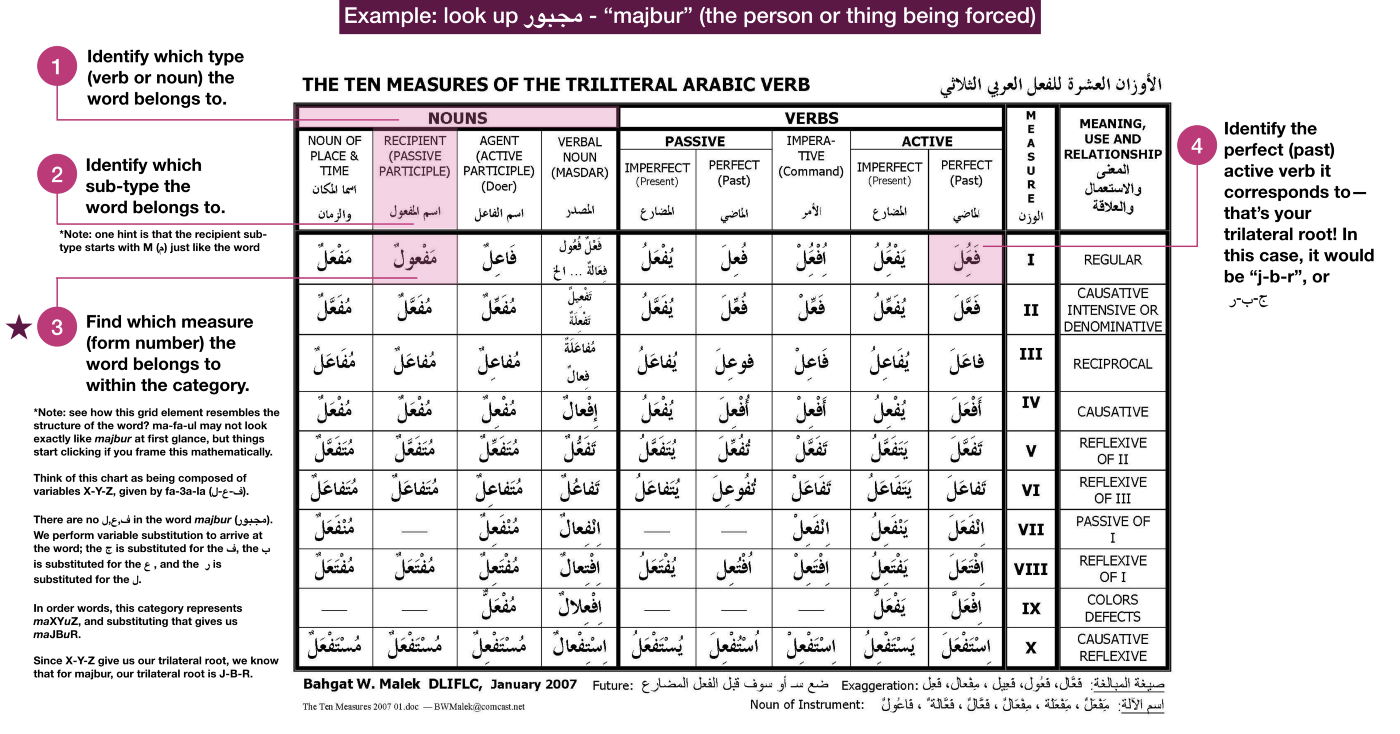 To deepen the intuition for this, let’s frame it mathematically. Recall that roots represent variables X-Y-Z, given by fa-3a-la (ف-ع-ل), and the remaining entries build around that root. 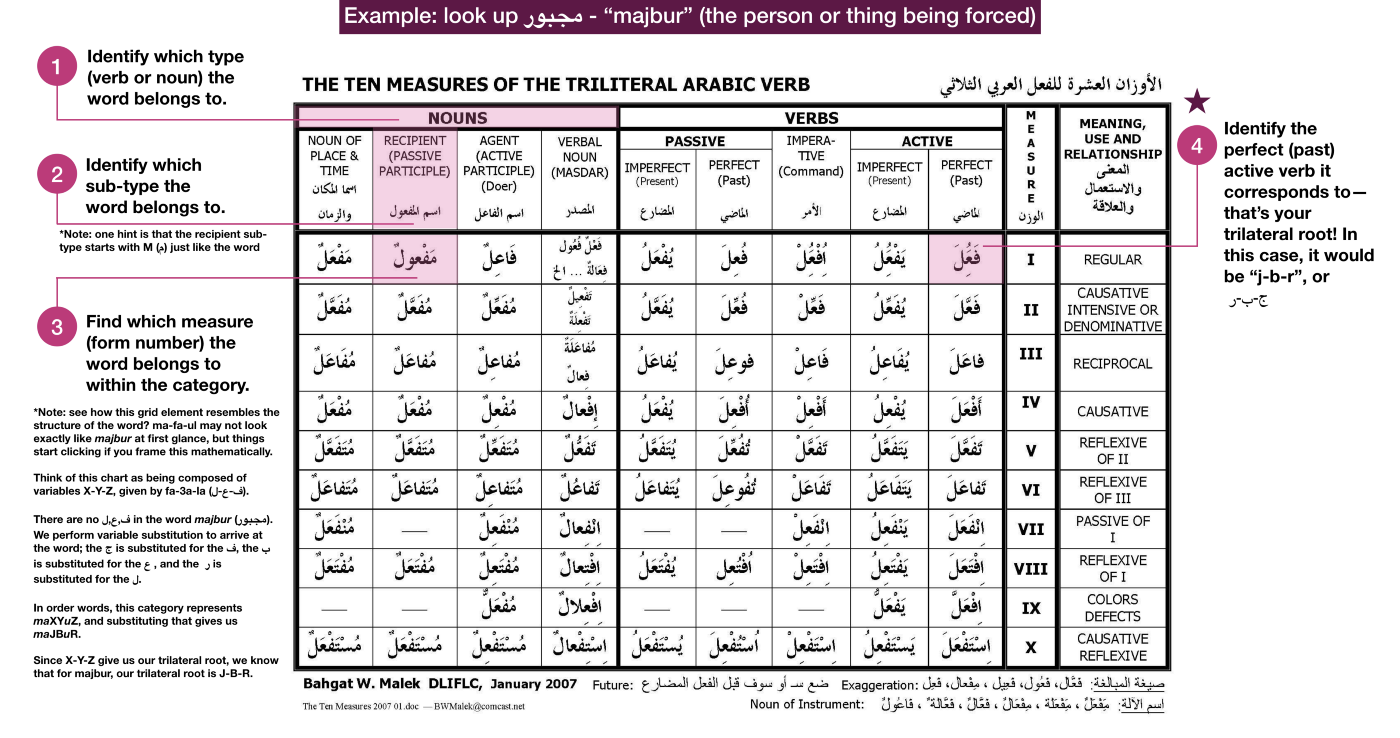 Now that we know its root, we can look it up in the Arabic dictionary. We type in J-B-R (or ج-ب-ر) in the search. 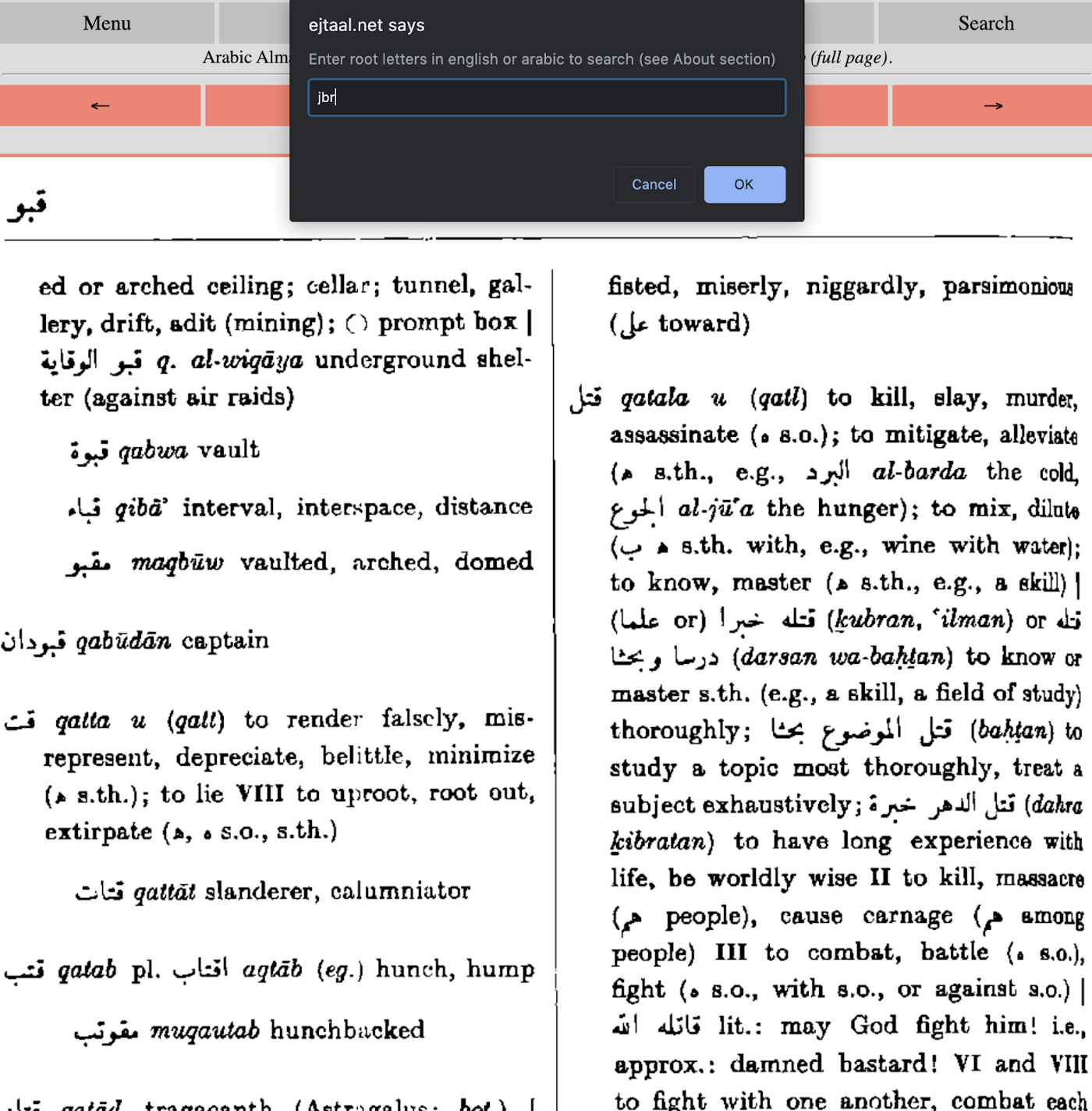 Looking up the root, we see majbur, along with its definition (forced, compelled). Voila! We looked up an Arabic word using trilateral roots!

The same process can be used in another example: kaatib (كاتب), which means writer. 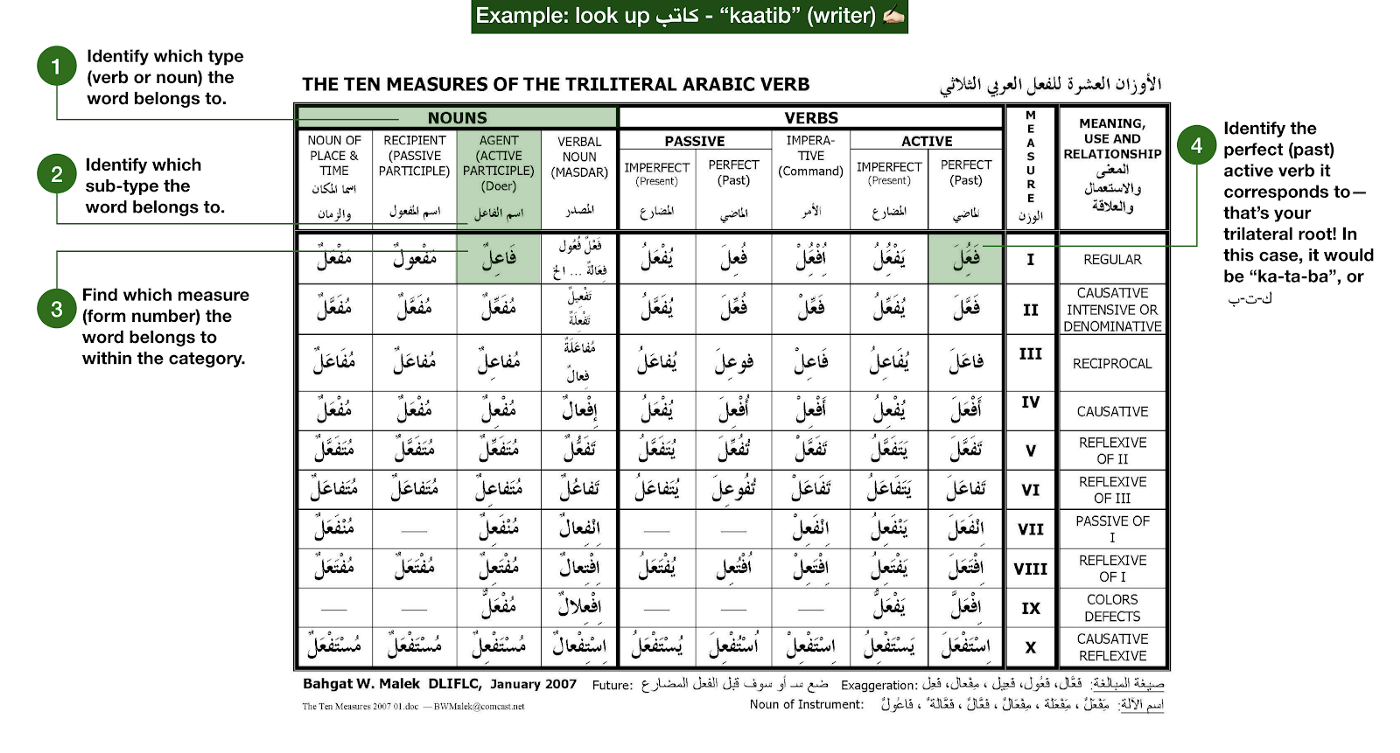 For our third and final example, let’s apply the same process to the word istemaal (استعمال) meaning “to use.” 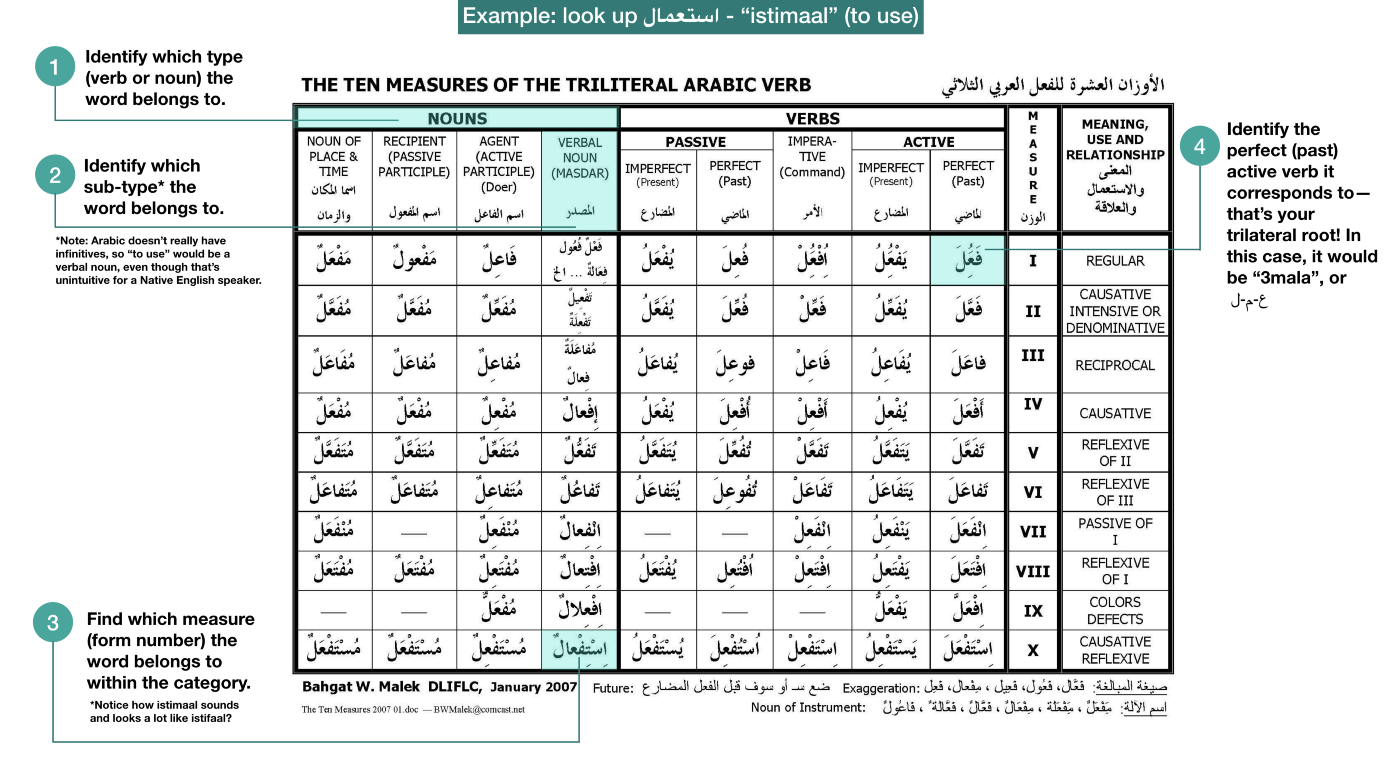 I’ll leave looking up the word in the dictionary as an exercise for the reader.

Trilateral roots combine the structure of the language with insight about its semantics. While this was not a complete guide on Arabic morphological patterns, this was an attempt to “learn out loud,” and publish my process.

Much love and gratitude to Kate Bridges-Lyman, a polyglot as equally brilliant as she is compassionate, who patiently answered all my questions as I tried to navigate understanding this verb chart.